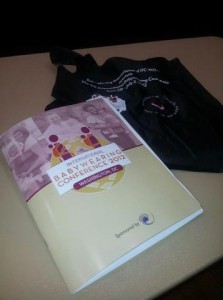 The second day of the International Babywearing Conference and a more leisurely start to the day. Today the conference was also open to the public for some special public workshops so even more babywearers and babywearers-to-be descended upon the University campus.

Today’s workshops had more of a research theme. Katie Nicolai, group leader of the Offene Tragegruppe Oberhausen reviewed the available research linked to babywearing, including studies by Hassenstein & Kirkilionis about the evolutionary aspects of babywearing (babies as parent-clingers), research about hip angles in babies and infant spinal stress.

Several researchers have looked into how carrying babies affects attachment and crying. (More about attachment later). Studies looking at crying and time spent in slings and baby carriers haven’t been conclusive – a 1986 study showed babies in slings cried less while others have shown no difference in crying.

Katie also reviewed some of the benefits of kangaroo care and research into upright positioning and being parent facing (especially the research of Suzanne Zeedyk).

It would be interesting to discuss this further with lots of you – what do you think about this research/the lack of available reserach showing some of the benefits of babywearing?

Dr Henrik Norhold, Chief Scientific Officer of Ergobaby, discussed the psychological outcomes of babywearing, reviewing theories on attachment, child and brain development and the effects of hormones on the growing child.

After lunch, we visited the Vendor Hall and watched a sling fashion show, which was great fun. Lots of Mums & Dads modelling a range of slings & carriers (many of which we’ve been trying on to see if our Facebook fans can guess which they are: try your luck). The show concluded with a daughter carrying her Mum in a sling! Tomorrow promises another full day of workshops including Free Form wrapping, babywearing and culture and the chance to hear the conference keynote speaker.

Today I joined hundreds of babywearers from across the US & Canada and from as far away as Japan, Norway & Denmark for the start of the International Babywearing Conference. Luckily the time difference worked in our favour and the 7am start to the conference which proved a challenge for some was easy for us (as it was 12pm at home & we’d had a leisurely lie-in, in effect!) The day was packed full of workshops with almost too many too choose from. 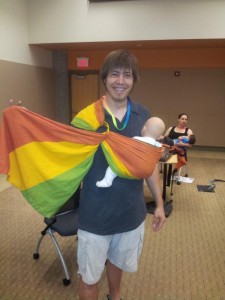 In Ring Slings for Men, Kyle Morse from the children’s store Elephant Ears, described how to make ring slings appeal to men, focussing on their use as a ‘parenting tool’ and reminding men that the ring sling was invented by a man. Facts like serial numbers appearing on sling rings also help men focus on the ‘gadget’ aspect of ring slings (and the same can be said for buckles, too, of course), Kyle related the useful adult learning approach of taking oneself back from the stage of unconscious competence (where we are so used to doing something that the skill is almost automatic) back to conscious competence (where we are aware of our own abilities) to enable us to deal with new parents who are first unconsciously and then consciously incompetent! Read more about it here. This applies more to men than women where our very approach can be off-putting if we make something look too easy or fail to explain it in a way that can be easily followed. Using adult learning techniques in our courses is something we believe in strongly.

Vesta Garcia, Director of the Baby Carriers Industry Alliance (BCIA) and Neil Cohen, Small Business Ombudsman of the Consumer Product Safety Commission (CPSC) spoke about safety and compliance in the baby carrier industry, relating how the BCIA was formed and discussing the development of baby carrier safety standards. Neil warned manufacturers and retailers about the need to ensure that their written instructions are well written and that all photographs displayed on literature and on websites show correct positioning. Even one picture that shows a poorly positioned baby could open up the company to litigation if parents follow that picture and their child is harmed. The same doesn’t apply in the UK at the moment but it’s useful to reflect on our views on photographs and videos that parents can easily access. There was a plea for educators only to recommend the use of manufacturers own instructions and not to look for instructions, descriptions and videos elsewhere. What are your thoughts on this?

Arie Brentnall-Compton of the Canadian Babywearing School ran a workshop on Training the Trainer, speaking about her School’s focus on ‘process not product’ and need to support parents and professionals in learning about how to babywear, not what to use to babywear (as long as the process is safe). She kept everyone’s attention with an interactive approach and plenty of movement. The School of Babywearing has lots in common with the Canadian Babywearing School & I look forward to attending more of Arie and her business partner Kelly Laffin’s workshops (including Free Form Wrapping and ‘Process not Product’).

After lunch , I had the chance to check out the Conference’s Lending Library of donated slings. Wow! With donations from Beco, Didymos, Freehand, Hotslings, Kinder Pack and many more, Alexander and I spent a happy hour trying slings and carriers and posing for photos! We tore ourselves away to get back to ‘work’ and attended the BCIA Educator’s workshop, meeting a range of educators, retailers and manufacturers from around the world. It was fascinating to hear about the key issues for everyone and the real wish for babywearing schools and educators of all kinds to work together to promote the key messages that parents need to hear. The most important of which is safety – not positioning in terms of legs/hips but positioning that keeps babies’ airways clear.

Everyone in the room agreed that safety must be an element of every babywearing course. We agree, even our one day Peer Supporter course covers safety and part of our practical assessment checks that participants can communicate the key safety messages to parents. The day ended with a reception hosted by the BCIA and more chances to network (and admire what people were carrying their babies in!). Tomorrow brings another large crowd of local (and maybe not so local) babywearers to the conference with a public Babywearing Open Day. Workshop choices include Free Form Wrapping, Babywearing Research Review, Psychological Outcomes of Babywearing, The Art of Weaving, The Joy of Rebozos and many more. And we get to bring another sling out of our personal stash to show off!

This entry was posted in Babywearing Information. Bookmark the permalink.