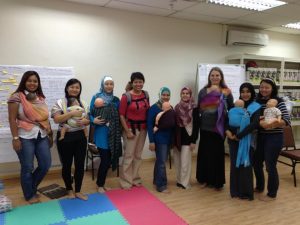 14 new courses on the system today! All open for bookings now with big Early Bird discounts. (And a round up of existing courses too for ease.)

Our courses are the only recognised UK qualifications in babywearing and will give you access to specially arranged insurance policies.

The Babywearing Peer Support course (one day) offers formal recognition of the skills of people who give information about slings and baby carriers through Sling Meets, sling libraries, antenatal classes or postnatal groups.

The Babywearing Consultancy course (three days) is aimed at people who give (or would like to give) one-to-one advice to parents about choosing slings and baby carriers. It will qualify you to work as a Babywearing Consultant and you will be awarded a Level 3 qualification accredited by TQUK.

If you aren’t sure which course to opt for, you can find some helpful information on how to choose the right course.

London Peer Supporter – next weekend – ONE Place available due to cancellation

London Consultancy – next weekend – ONE place available due to cancellation

And as ever, we are happy to look at putting on private or group courses for NHS Trusts or Sling Libraries – full details.

This entry was posted in News. Bookmark the permalink.